The weather is glorious in these early days of September. The kids have gone back to school, and the Welshpool & Llanfair Light Railway (W&LLR) is running trains during the week until the end of the month. So it was an ideal time to go there!

An early start was required, the 07:46 train from Wilmslow to Shrewsbury where we waited about 50 minutes for the train to Welshpool. The W&LLR used to run right down through the town to the main railway line, but these days it terminates about a mile away on the northern edge of Welshpool, at Raven Square. We had a gentle stroll up through the town in plenty of time to have a cup of tea before catching the first train out of Welshpool, the 11:15.

The line was opened in 1903 to serve the farming community of the Banwy valley, and was built to the unusual gauge of 2' 6". The gauge has led to stock being acquired from such places as Austria and Hungary, which gives it a non-UK feel with the coaches having open balconies at the ends. 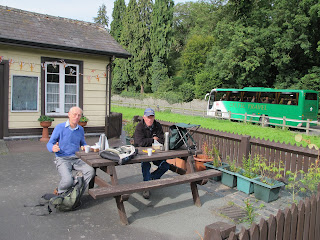 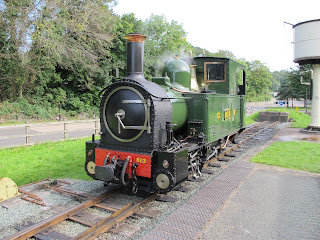 Our locomotive, 'The Countess', built in 1902 by Beyer Peacock for when the line opened in 1903 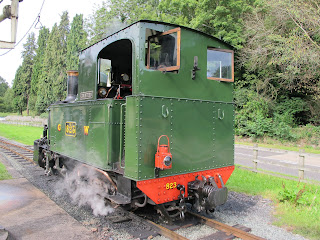 'The Countess' was rebuilt by the Great Western Railway, with a GW boiler and other GW characteristics such as just one gauge glass! 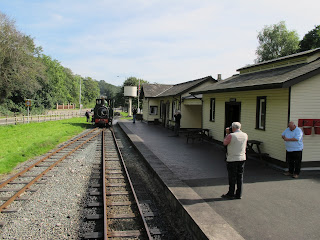 Looking back from the rear balcony of our train at Raven Square Station as 'The Countess' takes to the loop line to run around the train and couple onto the front of it
. 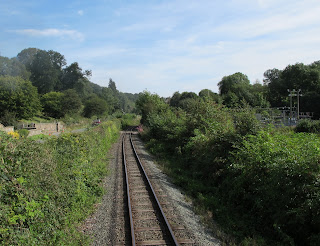 The initial climb out of Welshpool is an astonishing 1 in 29
. 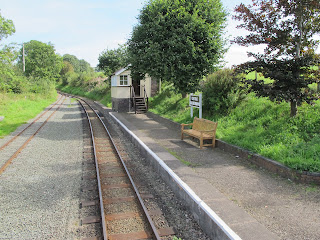 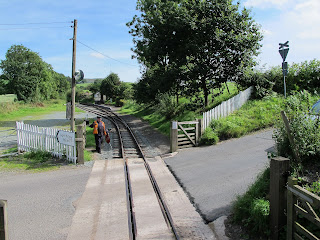 All but one of the crossings on the line do not have gates. At the one that does, the loco crew have to operate the gates; there are no crossing keepers on this line! 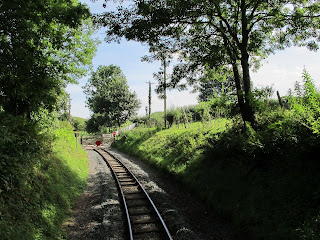 Gates closed, we're on our way
. 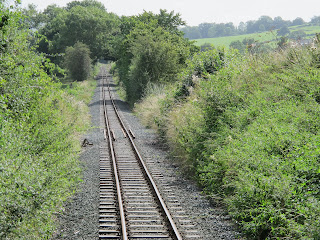 Typical countryside on the line, with an occupation crossing in the foreground 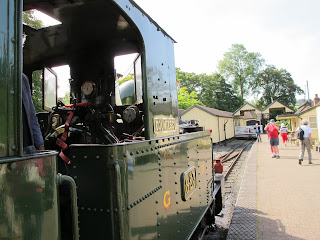 Our locomotive at the western terminus of the line, Llanfair Caereinion
. 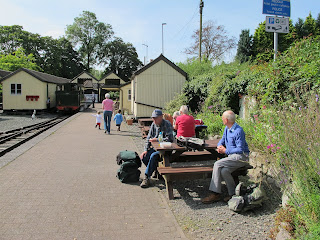 Malc and Peter enjoying lunch in the sunshine 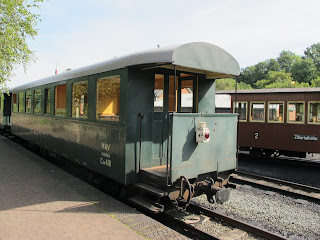 Our train, comprising two of these bogie coaches, at Llanfair Caereinion 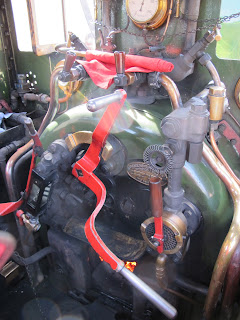 'The Countess' footplate. Just one gauge glass - GW standard practice but if I were firing her I'd feel a lot safer with two, if only because any problem with either of these absolutely vital indicators would show as a disparity. 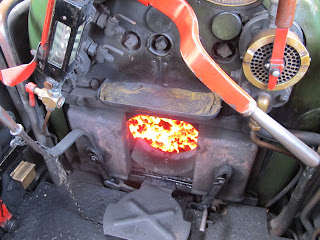 Firehole door open to allow cold air in, so she won't blow off (boiler pressure was close to maximum)
. 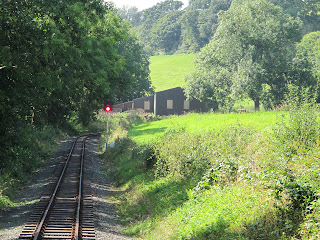 Leaving Llanfair Caereinion on the return journey. The red signal protects yard movements at the terminus from any trains on the main line entering the Terminus. 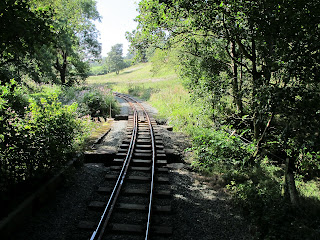 It really was a beautiful day - the very best weather for enjoying this delightful line
. 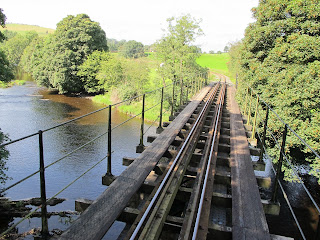 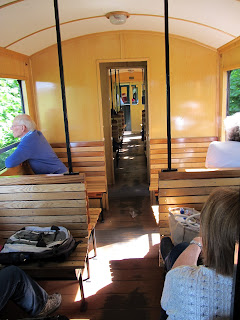 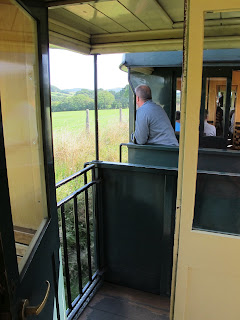 Looking out to the balconies between the two coaches 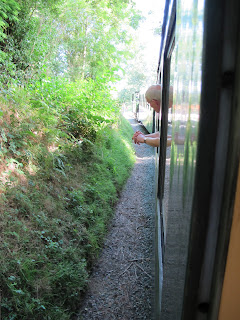 Peter getting closer to the scenery 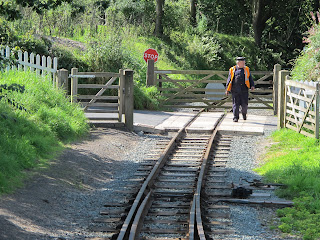 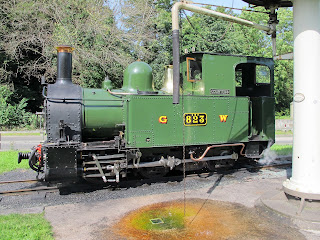 Our loco back at Raven Square, ready for a drink 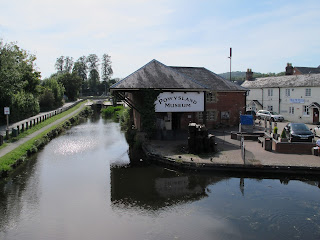 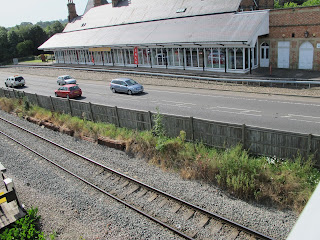 The main line railway at Welshpool has been moved to make way for a road! So the original rather handsome station buildings are now remote from the railway. 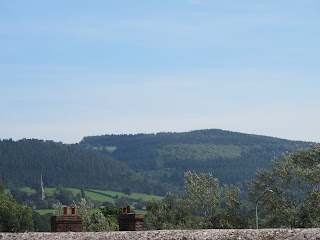 From the station one can see the ridge of Long Mountain. In January this year two highly experienced pilots (one who had run a flying business from Welshpool for decades and lived in the area, the other a retired airline captain) in a Piper Navajo twin-engined aircraft, seconds from landing at Welshpool International Airport, flew into the trees on the top of this ridge in poor visibility. Both were killed. I've flown into Welshpool many times myself, the first time when it was a farm strip called 'Trehelig Farm'.

The AAIB report is here:  http://www.aaib.gov.uk/sites/aaib/publications/bulletins/august_2012/piper_pa_31_325_navajo_c_r__g_bwhf.cfm 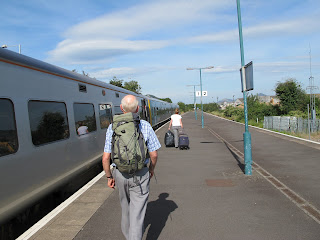 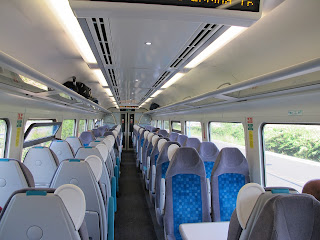 The Class 158 was lightly loaded, and soon sped on its way at a good speed along the single track line to Shrewsbury 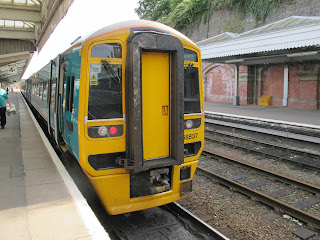 And here it is at Shrewsbury. After a short wait, another Arriva Wales train whisked us home to Wilmslow.

Yet another great rail day out!

Welcome to those referred here from Charlie Hulme's excellent 'North Wales Coast Railway' website  (http://www.nwrail.org.uk/).I can recommend a visit to Charlie's site if you have any interest in rail, not just North Wales related.

Everything on here is © Copyright Vince Chadwick 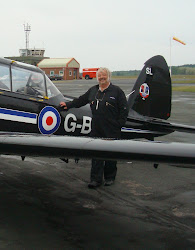 Actually, I employ an infinite number of monkeys to type this stuff. It costs a lot in bananas, but sometimes it's worth it. This morning one of them has written a play called Halmet.

Vince Chadwick
Wilmslow, Cheshire
Retired IT consultant, married to Christine, and with two grown up daughters. Although retired since January 2008, my various interests (see below) keep me busier than ever!